A journey into Englishness, from the Thames to the Lakes, industrial heartlands to chalk downs. Following tides and twittens, writing 100 poems along the way.

A park bench in Penrith, aviation at Shoreham by Sea, a skeleton in Margate, the Windrush in Brixton, bells of Whitechapel, The Lion Queen. Chalk and flint and wool and salt.

At Lombard Street Gallery, Margate from 28 Sep-8 Oct. Part of Margate Now, the offsite programme for the Turner Prize at Turner Contemporary.

‘Whenever you go down the roads in Britain, you travel not in three dimensions, but in four. The fourth dimension is the past.’ 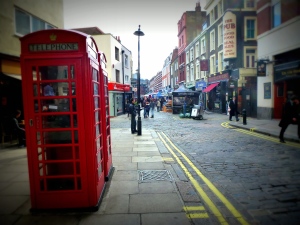 Strutton Ground is a small, hidden street, somewhere between Buckingham Palace, the Houses of Parliament and Victoria Station. It’s full of simple shops selling things we want and need.

The street is, I’d guess, mainly Victorian and the architecture is plain with lots of yellow brick. One stretch is 1950s modern, and probably replaced some bomb damage. The street is all one level, no raised kerbs, and is laid with traditional brick not tarmac.

It’s the perfect setting for some great shops. There’s Gordons The Jewellers, a couple of clothes shop, and a proper, independent hardware store full of useful things that are hard to find in central London. There’s a dry cleaner, a chemist, a newsagent and a general store – all the shops that, in too many places, have been replaced by a supermarket.

There’s an Oxfam Bookshop with all sorts of unusual old books; and the Book Warehouse which has practical, no-nonsense racks in the windows to display new stock. It’s impossible to leave Strutton Ground without books.

Luckily, there are plenty of places to sit and read them. There must be ten cafes, full of people that work locally and residents from the nearby Peabody Trust estate. My favourites are the Express Coffee Co who make good, old fashioned Italian coffee and filling, unfussy lunchtime food, the traditional fish and chip shop next door to them, and the Stiles Bakery which has been in the street for 60 years.

As if all that wasn’t enough, there’s a daily market too. There’s a cracking fruit and veg stall, another selling plants and flowers, an assortment of clothing stalls and more good coffee from Flat Cap Speciality Coffee.

There are a few familiar names, too – a small Jessops, a Costcutter and a Subway.

So everything that you need in a high street, with independents and well-known names side-by-side.

But what really makes Strutton Ground special is the atmosphere. The combination of real London buildings, a market, no cars and lots of life is special, and I don’t know anywhere else in the country that feels quite like it. There are people from high-flying Westminster jobs and media types from the nearby Channel 4 building, mingling with great London characters, dapper old men in three piece suits and ladies who ‘put their face on’ before going to buy the week’s veg. And tourists, who’ve found a piece of real, traditional London that’s not unlike Albert Square. There’s even a pub, on the corner, The Strutton Arms.

I run the Empty Shops Network, working with community groups who want to fight for their high streets, so I’ve visited over thirty towns across the country. I help people set up ‘pop up’ projects in empty shops, and have written a book, Pop Up Business For Dummies.

Strutton Ground doesn’t have any empty shops, and has permanent businesses, not pop ups. It’s exactly what we all think of when we say ‘High Street’ – and it’s exactly what every town needs.

Originally written for the Daily Express ‘Save Our High Streets’ campaign 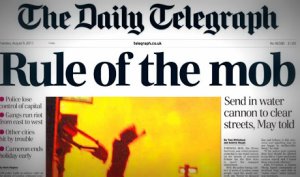 England riots. It has a history of rebellion, revolt and rough protest.

In 1381, the peasants rose up, murdering tax collectors and bishops. Under Wat Tyler, the mob marched from Kent to London, where they looted palaces. For nine days, the peasants were in control.

In 1649, Gerrard Winstanley led people unable to pay high rents to landlords, and the rebellion took over wastelands to build their own self-sufficient community. The good life.

In 1782, workers marched into Birmingham, calling for regulation of food prices which had risen. Marches, riots and looting were commonplace at the time.

In 1812, Luddites rose against unemployment, and fought the owners of businesses who were making huge profits while their workers starved.

And on, and on. Chartists and CND, suffragettes and the Skeleton Army, Poll Tax Riots and anti-nazi protests, Boudicca burning down Colchester to Cable Street – this is the history of the people of England, alluded to in Danny Boyle’s marvellous Olympic Opening Ceremony this month. The world is regularly turned upside down. And when it’s righted, the people have made another incremental change to the order of society.

The riots of August 2011, though, stand separate from this tradition. For sure, they can be explained in the same terms; there is great poverty in England, and the gap between rich and poor is wide. Unemployment is high, while the richest take big bonuses. 500,000 forgotten families currently ‘bump along the bottom’ of society. And trust in the Police is low.

But this time, there wasn’t a challenge to the rich, a call for equality, or a riot to support a political manifesto. Instead of ransacking palaces, rioters smashed local shops, and burnt their neighbour’s homes down. 50% of the people prosecuted have been charged with ‘Acquisitive’ crimes such as looting or burglary. And altogether, only around 12,000 people are estimated to have taken any part in riots. 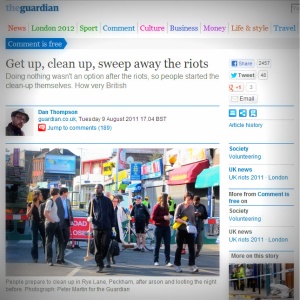 So people responded, and not in a way that was ‘anti’ the riots but in one which was firmly ‘pro’ the community. Everybody knows that England is in trouble, but only 12,000 rioters in a nation of 62,641,000 people felt that looting local shops was the answer.

The most visible of the things that happened after the English riots, and one which gave energy to the others, was #riotcleanup. I’m proud to have had some part in that, starting #riotcleanup just after midnight with a single Tweet and by the end of the day being one of perhaps 100,000 who got involved via Twitter, Facebook and out on the streets.

The opposite of  fashionable anonymous protest, #riotcleanup was a visible, public show of support for local community and was about real people. Even the iconic #broomarmy photo is taken from inside the crowd. It makes you part of the action, not a spectator.

After #riotcleanup came a relief effort, fronted by Kate Nash, which saw vanload after vanload of clothes, food, toys and other essential items delivered to the families whose homes had been burnt down. #riotrebuild mobilised the building trades, and saw Siva’s grocery store in Hackney reopened within weeks. Fundraising campaigns, started online in the days after #riotcleanup, raised tens of thousands of people and helped where the official Riot Act compensation failed to appear.

And here, a year on, the work to address the deeper problems the riots highlighted carries on.

The Guardian’s Reading the Riots and the Riot Communities & Victims Panel report both provide a valuable insight into why the riots happened.

Peckham’s Peace Wall was a spontaneous gesture at the time, a transient sea of Post It notes written on by local people saying why they loved their home. One year on, notes scrawled on paper have become a permanent memorial and been commemorated in a limited edition artwork.

Retail Ready People has just been launched by vInspired and Retail Trust. It has its roots in the riots too, in a campaign run by Retail Trust called #highstheroes to help independent businesses. And now it will train over 300 young people, many working in retail’s lowest-paid jobs.

In Lambeth, one man has set up the Team Lambeth Boxing Club, to give young people a structured way to get rid of their aggression.

The #reverseriots campaign shows the good that young people are doing in society, to counter the myth that the younger rioters across England were representative of a whole generation.

I love MCR and I Love Tottenham are two local campaigns, both allowing people to show pride in the places they live.

Happiness in Tottenham, funded by the crowd, looks at why Tottenham has a history of riots, and at whether there is an architectural solution that could help the area.

And #wewillgather is the direct descendant of #riotcleanup. It will let people get together to do good things in their community, creating flash mobs of volunteers who come together in one place, for a short time, to do some good.

They’re just some of the things happening, one year on from England’s riots. I’ve worked in community arts, been a street-based youth worker, and tried to reclaim our privatised town centres for community use. So starting #riotcleanup didn’t feel like a big step away from my everyday work.

It has, though, changed my life. And I think the projects that have started since then, all addressing the big issues in some little way, might change the lives of others, too. The pro-community work didn’t stop with hundreds of brooms in the air, the problems haven’t been swept under the carpet, and the effort that everyone made when they helped clean up certainly hasn’t been wasted.