Fifteen years ago, the National Front marched in Margate. The end of the 20th Century was much like the start, and refugees were fleeing from war in Europe. Arriving in Britain, they were met by fear, hostility, anger and lies. The Jews, fleeing Germany and Eastern Europe in the 1930s, had received a similar welcome in British seaside towns. Oswald Mosley’s Blackshirts paraded in Worthing in the mid-1930s, and the National Front continued the tradition in Margate 65 years later. Some things never change; perhaps racism runs through seaside towns like letters run through seaside rock.

As the 21st Century begun, the Isle of Thanet was home to only about 3000 asylum seekers, most living in Margate. They were fleeing from something real. A local doctor reported treating “shrapnel wounds, scars from beatings and torture, wounds from landmines” and the psychological problems associated with such injuries. The people he was treating included doctors, ex-army officers, dentists and teachers. Many were Kosovans, in England to escape death at the hands of the Serbs.

Once here, they were met with open hostility by people who lived in a largely closed, settled community, unused to foreigners, and which was struggling with its own problems. The local industry, a tourist trade which had started in the 1700s, had collapsed. Thanet’s people had always had low incomes, uncertain jobs, and seasonal employment but, by 2000, things had reached a low point. Boarding houses were filled with Londoners, resettled by local authorities who had run out of space in the capital. These new residents often brought their own problems, which were only increased by unfamiliar surroundings and social isolation.

And the relationships London’s local authorities had made with landlords in Margate, meant they could use the town to house their refugees, too. Once grand hotels like the Nayland Rock, and the larger, prouder guesthouses in Cliftonville, were just empty spaces to council officers. Seaside landladies saw a quick buck, and either filled their vacancies or sold up to London councils. Kosovans didn’t choose to come to Margate; they were sent here.

“The people in Thanet don’t like us, nobody likes us,” one told the local paper, “We are here because of the war, because our lives were being threatened. We are not here because it is an easy life.”

A local teenager saw things differently: “They come over here and they have it easy. Then they are rude, they try and rule the place, they barge past and are very arrogant. They are trying to take over. I am not a racist person. I don’t support what the National Front do, but asylum seekers are not liked by a lot of people.”
Of course, asylum seekers never did take over. In 2015, just 8.59%of the population in Thanet were born outside of the country. The national average is 12.5%, London has 37%, and even in sleepy, middle class Canterbury 10.96% of the population were born abroad. 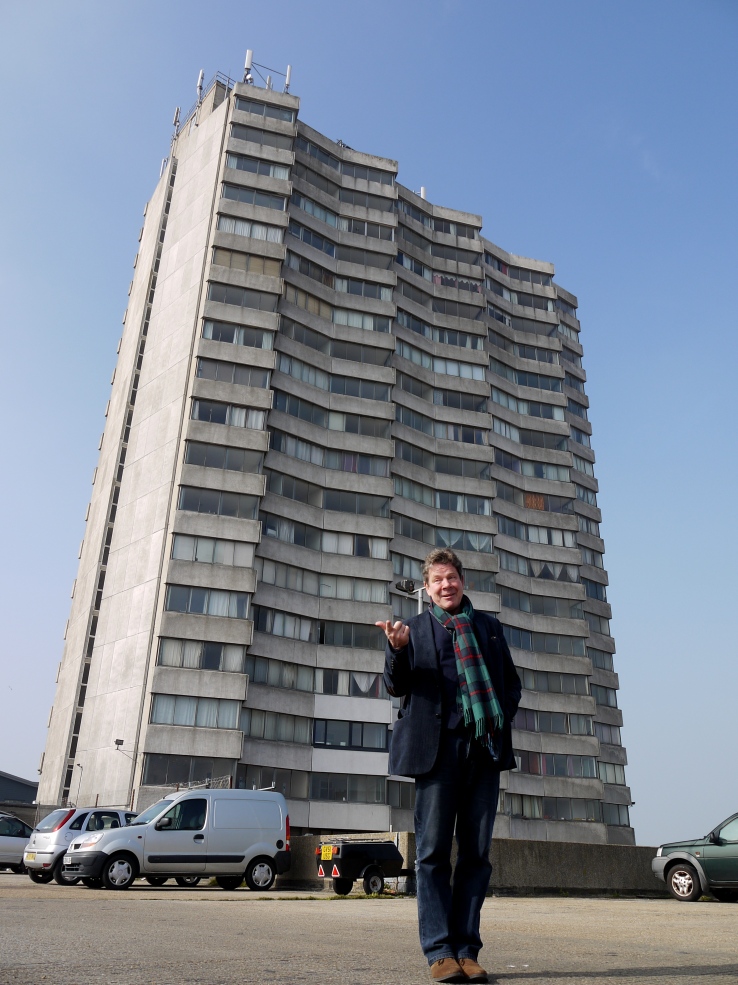 Playwright John Retallack wrote Hannah and Hanna, about a 16 year old Margate girl meeting a Kosovan girl and forming a friendship across hostile lines, in 2000.
The founder of Actors’ Touring Company, a director of the Oxford Stage Company, Retallack is particularly interested in theatre for and about young audiences. He’s written a dozen plays for young people, and has recently spent two months with La Chartreuse de Neuville in France, researching the lives of young refugees in the notorious camps in Calais.

Returning to Margate in 2015 to write a sequel , Hannah and Hanna in Dreamland, to his earlier play, he struggled to find any Kosovans to talk to. He journeyed instead to Pristina, the capital of Kosovo, to find that most people had returned there, after the war.

He found a city with a hard past enjoying a rebirth that, in some ways, mirrored Margate’s own.

Margate today has a growing tourist trade. The new visitors are here for Turner Contemporary, the Old Town’s vintage shops and cupcake cafes, and the Hemingway-branded Dreamland, where ‘heritage’ is a dirty word but ‘retro’ or ‘vintage’ are perfectly acceptable. The town is the hippest destination for London’s cool under 40s, and is in the middle of a property bubble as people relocate here, swapping East End flats for big seaside homes as they start families. This new crowd, known locally as DFLs (Down From Londons) , experience a lesser version of the anger the Kosovans experienced before. There are fears of gentrification, of rising property prices, of the new ideas these economic migrants bring with them.

And there’s still a racist tension underneath everyday life too, still a fear that the town’s somehow being taken over, and it’s most evident among a slightly older generation, who saw their town’s fall, and are still looking for someone to blame. And a younger generation have inherited that anger. The teenager quoted in the Thanet Gazette has gone from “I am not a racist person…” to having a pitbull tattooed on his chest, and giving his support on Facebook to pages like the English Defence League, True British Patriots, English and Proud, the Royal England Infidel and one called ‘I Was Born In The Uk. So Why Do I Have Less Rights Then Immigrants’ [sic].

UKIP tried to capitalise on this cross-generational anger in the elections in 2015. Throwing everything they could at the Isle of Thanet, swinging a well-funded party campaign into action, UKIP booked every billboard for months, filled hotels with their campaign teams, and pushed leaflets through every letterbox every week. They failed to get their prospective MP Nigel Farage elected. The party collapsed into bitter infighting soon after.

So while many things in Margate are the same, 15 years on, there are great differences too. Hannah’s still friends with Hanna, but it’s a different world they live in. Margate’s new London incomers are more used to a multicultural society, and the town’s relaxing into the 21st century.

Retallack’s new play might find that perhaps, just perhaps, it’s possible to change the letters in a stick of rock.

There will be a rehearsed reading of excerpts from Hannah and Hanna and Hannah and Hanna In Dreamland at Turner Contemporary as part of Looping The Loop. The event is organised by UK Art International and Theatre Royal Margate.

Hannah and Hanna In Margate is an ongoing photographic series by Dan Thompson, capturing Retallack in Margate, as he researches, writes and tests the new play ahead of a UK tour in 2017. It will be exhibited alongside the rehearsed reading at Turner Contemporary before accompanying the show on tour in 2017.

One thought on “Hannah and Hanna in Dreamland”

First ride in my new cycle helmet from @dashelcyclehelmets. A crisp ride across the fields from Broadstairs to Margate, where I'm assisting @signsbysandk with signwriting on Northdown Road shopfront. It's so comfortable - I have struggled with cycle helmets that are heavy and restrict my view looking back, but this is ace. And - it looks good too. Thank you, Dashel! #margate #broadstairs #cycle #cycleshots #cycling #selfie #cyclestyle #signs #signwriting
Have been working quietly on this idea, but tonight's the night to share some news. Margate is twinned with Les Mureaux (France), Idar Oberstein (Germany), Yalta on Black Sea. But we have no organisation to make that meaningful. With the permission of the office of the Margate Charter Trustees, next week I'm calling a meeting of a new Margate Twinning group. The original twinning was set up in 1960s, group closed in 2004. We can rebuild those links with France, Germany, Crimea. Are you interested? #margate #lesmureaux #idaroberstein #yalta #uk #france #germany #twinning #together
I'll have a 99 please, Quentin. Norman Cook and Suggs in the Stylish Ice Cream Co's lovely 1974 van outside @dreamlandmargate, giving away 100 tickets to the new Hi Tide Festival. #dreamland #lovedreamland #fatboy #fatboyslim #madness #margate #icecream
Worked with @keithbrymerjones last year, on a project remembering the history of work on Stoke's Spode Works. Here he is at the wheel in his Whitstable studio. He's on the telly again with the Pottery Throw Down on Channel 4. #potterythrowdown #potterywheel #potterythrowdown2020 #pottery #keithbrymerjones
Stacks - a reading room at Turner Contemporary for one day, all books inspired by the themes of the work of the four Turner Prize winners. People have stopped, read, had conversations, taken away titles of books they'd like to read further. #books #bookstagram #turnerprize #turnerprize2019 #margate
Choose Love at Christmas. #christmas #katherinehamnett #migrant #refugee #gold #jesus
%d bloggers like this: