For A Fete Worse Than Death, artists Tom Swift and Paul Hazelton got a gang together. Meeting in an ice cream parlour in Tom’s hometown of Ramsgate (out of the eyes of Margate’s art cognoscenti) the boys (and one girl) planned one perfect job, never to be repeated. De-In-Stall is a joint collaboration between Tom and dust artist Paul Hazelton featuring pop music video director Simon Williams, artist Steve McPherson, colour poet Emrys Plant, musician Steve Graham, and seamstress Beth Anderson. They ended up being joined by the ice cream shop owner, a reclusive ex-millionaire called Caspar (who once owned Gillingham Town FC), who dispensed advice to visitors.

To move from running an ice cream parlour to mixing with the art elite in a short space of time seems like an unlikely career arc. So just who is Caspar the Art Oracle? Ahead of this week’s Art Car Boot Fair in Folkestone (at which he may or may not appear) I’ve done some digging. Here’s his voice, on the trailer for a new De-In-Stall motivational film by Swift and Hazelton:

He certainly sounds like an interesting character; a guru, passing on knowledge, giving insight into the world. So what’s his role in Swift and Hazelton’s artistic practice? Notice that accompanying Caspar’s voice is an image of a duck – not a realistic duck, more an icon. 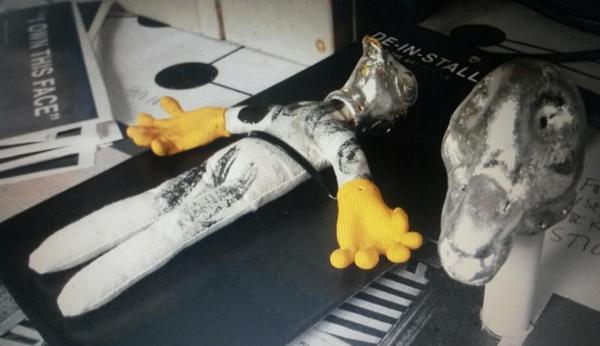 Some images of the work that Swift and Hazelton have produced for the Art Car Boot Fair have been leaked on social media.

At the last De-In-Stall, Caspar the Art Oracle appeared with slicked-back hair, a duck’s bill mask and a rapid-fire patter. So these leaked images appear to show bizarre effigies of Caspar the Art Oracle, tattooed dolls with silvered duck heads and giant hands. They appear to be constructed in a ritual way, with three artists working to produce the various parts, and to have similarities to the Greek Kolossos tradition.

So – what’s the significance of the duck? Historically, the Sacred Duck appears in Tibetan folk stories (such as ‘How the sacred duck got his yellow breast’). It is also one of the spirit helpers of the Siberian Shaman.

In the 20th century we find it in Hans Gál’s opera Die Heilige Ente or The Sacred Duck, which premiered in Düsseldorf in 1923.

The title is as farcical as the opera: Chinese gods, fed up with perpetual worship and the smell of incense descend into an opium den where, as a distraction, they swap the brains of various miscreants. A duck, historically a theatrical tool used as a symbol for the ridiculous, is a by-product of the farce and ultimately leads to a happy end. There are no recordings of this work.

In 1938, Hans Gál fled to Great Britain, and after internment as an enemy alien, he settled in Edinburgh, where he taught at the University. He became a much respected member of the Edinburgh musical scene and was one of the founders of the Edinburgh International Festival.

Edinburgh is of course well-known for the Italian community who settled there – and for the ice cream parlours they opened there from the 1920s onwards. And one of the few facts we know about Caspar the Art Oracle is that he is the owner of an ice cream parlour in Ramsgate.

So it’s possible that there’s a connection between the Italian communities in Edinburgh and Ramsgate, and that connects the older Hans Gál and the younger Caspar the Art Oracle. Was the recipe for a good ice cream the only thing that was passed down?

The other connection worth exploring is in Celtic mythology. There we find Sequanna who was a Celtic river goddess, and her sacred animal was the duck.

Both Swift and Hazelton are Margate residents, and in this town on the Isle of Thanet, water is very important. As well as the River Wanstum which cut the Isle of Thanet off from mainland Britain, a lost river flows through the centre of Margate. It’s easy to track; it follows the line of King Street and Dane Road through the town centre.

Just off this line is the mysterious Shell Grotto. This would have stood on the banks of the river. The Shell Grotto’s underground labyrinth was discovered in 1835, we’re told, by somebody digging a duck pond! Obviously it was already known, and this tall tale is an in-joke for the initiated.

The Shell Grotto is either Celtic or Romano in origin. It’s an  underground temple, with a serpentine passage suggesting that activity in this site was connected with the flow of water. Hazelton has produced and exhibited work in the Shell Grotto as their artist-in-residence. As such, he’s almost certainly been inducted into the secret cult around the temple.

So we’re left with an intriguing possibility – a series of connections between Hans Gál, Hazelton, Swift, Sequanna, the Sacred Duck, and the mysterious Caspar. Are the De-In-Stall artists modern-day custodians of the tradition of Sequanna and her Sacred Duck, a secret knowledge passed to them by Caspar the Art Oracle, who received the knowledge from his teacher Hans Gál, and kept alive at the ancient Shell Grotto where it was passed from Celtic to Romano ownership? It’ll be worth watching future De-In-Stall events for more clues.

3 thoughts on “Caspar the Art Oracle and the Sacred Duck”