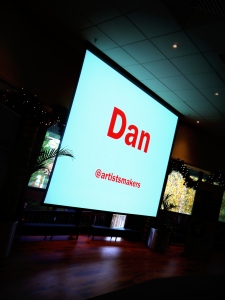 I was invited back to Portsmouth’s creative networking night Gloo yesterday. I’m honoured; I’m not often invited back after a first visit. The theme of the evening was ‘social media’, with a range of people talking about the how, why and where of using Facebook, Twitter and Flickr.

So I wrote the Rules of Social Media. And here they are:

1.Social networking isn’t an online thing, it’s the real world; it’s about talking to real people. Just more of them than you’d find in the street.

2.It’s not about broadcasting; it’s about conversation, collaboration and creation.

3.Do it all the time, especially when you’re offline; carry business cards, create real events, spread the word. Evangelise.

4.Because it’s the real world, be honest and considerate. Hype, bullshit, arrogance and bluff will be found out.

5.Share. Give stuff away, pass interesting things on. Like an explorer of the internet, create maps for the people following.

6.Don’t believe people who tell you ‘these are the rules of social media’ – there are none, we’re all making it up as we go along.

2 thoughts on “Rules of Social Media”